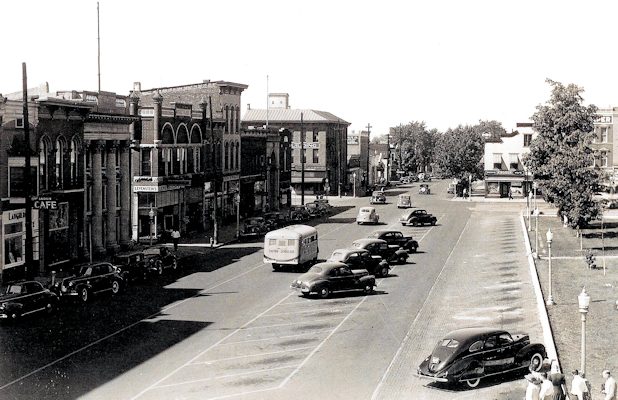 The Cheer Fund began in 1911 by James Caskey, publisher of the Greensburg Daily News.  Mr. Caskey passed away in 1915, with his wife Mabel carrying on in his name until 1918. When the United States became involved in World War One in 1918, it is believed that the Cheer Fund was inactive for two years during the Great Depression.

Walter Lowe became editor in 1947, and had strong feelings for the community in which he served and for Christmas. Mr. Lowe is known for paving the way that put the real meaning of Christmas in our community. Until  1964, The Cheer Fund was for Greensburg residents only, but Walter insisted it be expanded into the county as well.

In the early years, money was tight and so was the budget for the Cheer Fund.  In 1968 records indicate we assisted 42 families in the county and 46 in Greensburg. In the past the Cheer Fund furnished clothing , but changed to gift certificates in the early 70’s. Memorable years in packing boxes include giving blankets for families without heat in a year that was very, very cold. Another year a young man brought in a box of toys to be included at the last minute. As times have changed, so has the Cheer Fund. Today, we assist children and families at Christmas by furnishing kid friendly foods since school is now out for a two week holiday break. Toiletries are also packed along with age appropriate toys and clothing certificates for the children.

Volunteers begin planning for the next year in early spring, and the momentum continues throughout the year, culminating with volunteer drivers arriving early to assist in the delivery of packages on Christmas Eve Day. It’s an exciting time for all involved, with volunteers experiencing  the true Spirit of Christmas.

In keeping with available technology, families may now download their applications or print out from the Daily News. Applications are then screened by a committee to determine each family’s needs using SNAP guidelines as a reference. Applications are also shared among other supportive organizations to avoid duplication, and to ensure that all eligible families receive the help they need.

The Daily News Cheer Fund could not survive without the generosity of its volunteers, and individuals who give their time, energy and love to make children’s holidays brighter. Businesses and organizations are an important part of our success, and it couldn’t be done without their and your assistance.

2011 marked the 100th anniversary of the Daily News Cheer Fund and was recognized with a Resolution by the Indiana General Assembly. The Cheer Fund continues to be a huge undertaking filled with love and celebration of people helping people, and caring for their neighbors.  James Caskey, his wife Mabel, Walter Lowe, and all others that have passed on before us are sure to be proud of The Daily News Cheer Fund, its dedicated volunteers, and the organization’s accomplishments in helping our own.

Yours in the Holiday Spirit, 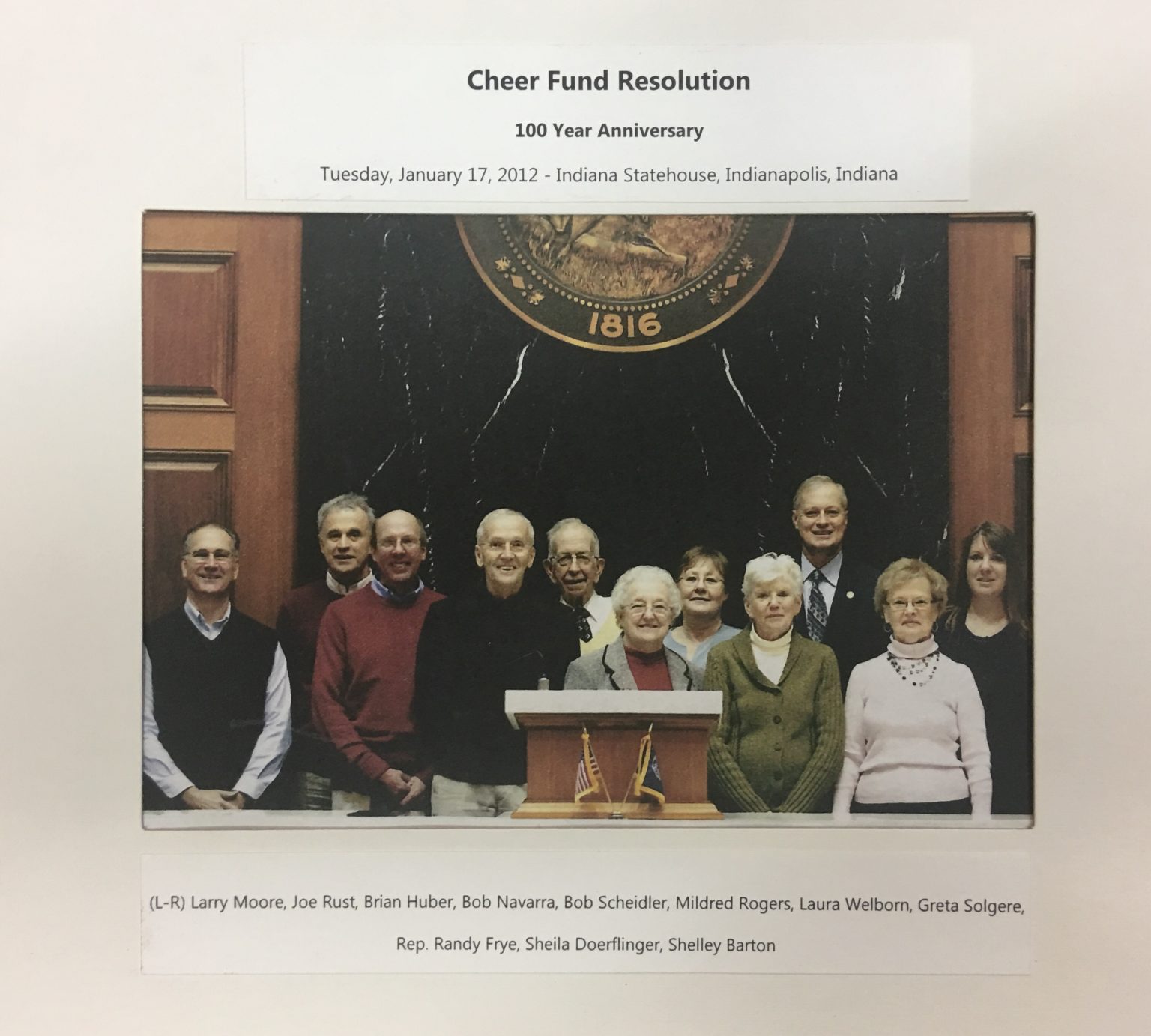 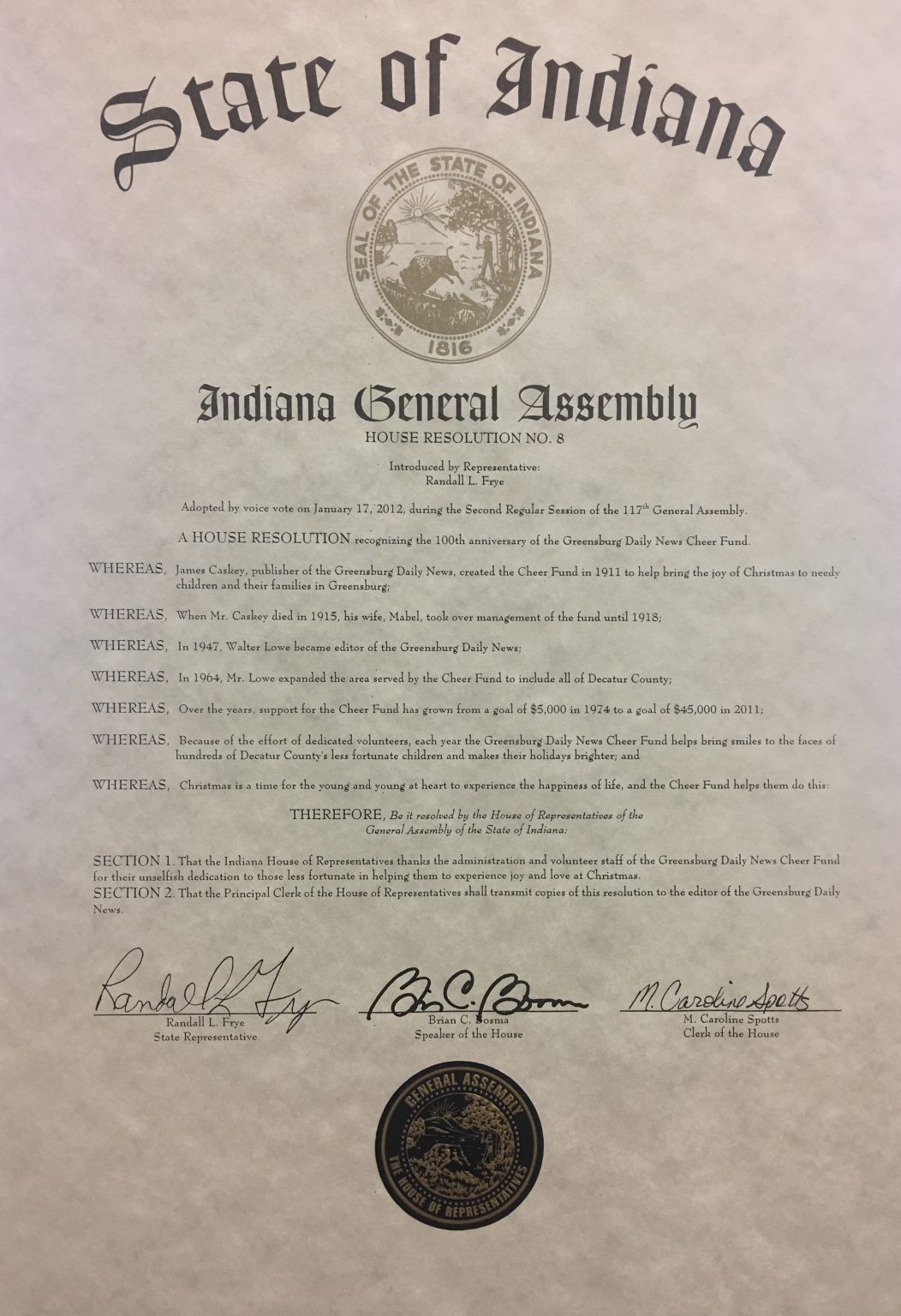